The fruits of the cherry tree, Prunus, differ in size and color, depending on its variety.

The exact origin of the fruit has not been determined clearly, however, ancient Greeks believed that it came from Asia Minor, most probably from the city of Kerasounta in the Black Sea, from which later took its name, “kerasi” in Greek. 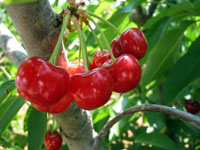 The Roman general Lucullus was the one that brought them to Italy when they were discovered. Cherries are sweet, sour, and have a heating effect on the body eliminating mental fatigue. They have high contents of iron, potassium, vitamin A and their sugars do not add calories. The contents of mineral salts increases the alkaline reserves of the body, contributing thus in fatigue reduction. Cherries have detoxifying ingredients for the liver, bladder, glandular system and body in general. Their acidity, is solely due to the malic acid, traces of citric and tartaric acid.

This special fruit escaped from biological enhancers, remaining faithful to its natural destination: maturing at summertime only, forcing us to taste it only for a few weeks per year.

Cherries are consumed as fresh fruits, or canned for pastries in bakery.

The famous cherry sweets are made both by the sweet and sour varieties.Their seeds are commonly used to give flavor during brandy aging. 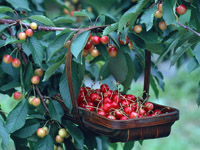 Kirch, Cherry Brandy and various other famous drinks are the results of natural fermentation of the black bitter cherries.

Among these drinks, the most noble and difficult to produce is the cherry wine, where for its production high technology and specialization of the winery is required.

It is prepared by conventional techniques, very similar to those of grape wining, in order to retain the beneficial properties and vitamins of the fruit.

This semi-sweet wine has an intense ruby red color, providing initially rich bitter-sweet flavors, tannins and intense flavor.It has a fruity aftertaste, with soft notes of bouquet of flowers.Served chilled alone as a drink, or with fruit and dessert dishes.It is an ideal proposal for something different and special.

Follow us in Social Media and stay tuned to hear from us.